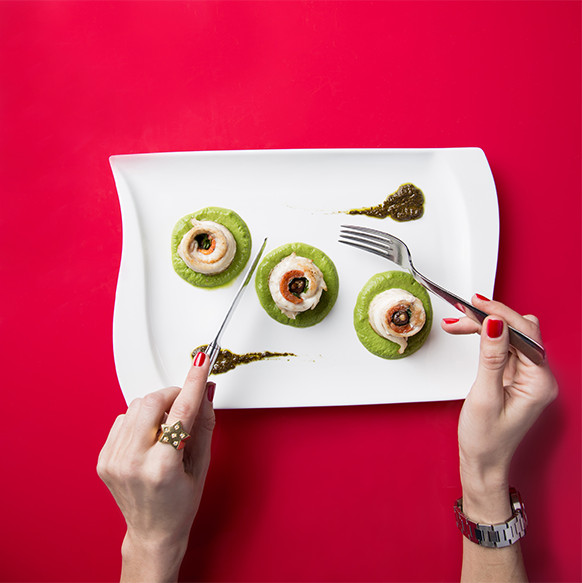 Why open the Ristorante Santa Virginia?

A lot of people have asked me that question and, to tell the truth, I’ve asked myself sometimes too. The answer is about as simple as it gets: I am following my dream.

My love of cooking comes from my complicated Milanese/Sicilian/Puglian background which translates into the memory of my grandmother’s orecchiette con le braciole, the cannoli AND pasta with sardines my dad, who was a hopeless cook, used to take me to eat when I was a child. A love of good company is the other legacy of my complicated roots, the ancestral engine of Italy, a wonderful place to which I feel deeply that I - or rather we -belong.

As a result, our cuisine is, first and foremost, extremely Italian. It’s innovative too but respectful of its ingredients and logic.

So this is my dream: a dream that, now that it has become a reality, can be tasted as well as touched…. 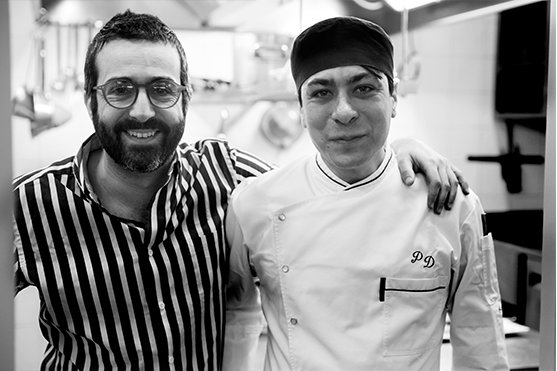 My name is Francesco Sciacca and, although I was born in Milan in 1979. After various kinds of jobs in the tourist and hospitality sectors, I decided to follow both my nose and my dream. So I became a chef and opened my own restaurant.

I did the Gambero Rosso professional chef course in Rome, finishing first in a class of 36, and began working in various restaurants.

I was part of the staff involved in the opening of Unico, at the Milan Trade Fair Centre, with Chef Baldassarre, and then had a marvellous time with Chef Bartolini at the Hotel Devero in Cavenago di Brianza.

Stints at Petit and at La Cantina di Manuela in Milan, Sans Souci and Pulcinella in Monte Carlo and the Vedura Golf Resort in Sicily followed.

Then, at long last, I decided to create something of my own, a place said something about me, but in the flavours dear to my heart rather than in words.

That is how my dream came into being. Inspired by an old, family memory: Santa Virginia.

You’ll probably be wondering about the Santa Virginia name and where it came from, etc.

Well, you should know that I have a sister of whom I am extremely fond and her name is Virginia. She is also now my business partner, and, without a shadow of a doubt, the restaurant’s very own “art director”.

In the family, Virginia was always known as “Santa” but anyone that knows her well, will tell you she’s more devil than saint!

Virginia’s unique personal style inspired the look and feel of the restaurant, so I have attempted to recreate that character in my menu.

Chef Diego Pecchia is 35 and trained at the Istituto Alberghiero Carlo Porta in Milan before completing internships in the likes of the Marino alla Scala (Trussardi), the Grand Hotel de Milan and Il Luogo di Aimo e Nadia.

His career also included stints at La Terrazza in Milan, Just Cavalli Café, ten years at La Cantina di Manuela and, importantly, the Hotel Principe di Savoia in Milan, where he met the woman who was to become his greatest mentor, the multi-Michelin-starred Paola Budel.

The food we serve in Santa Virginia is the product of a meeting of Francesco and Diego’s souls. It is Mediterranean in style with an Italian emphasis but also open to experimentation. Low-temperature and sous-vide (vacuum) cooking combine with a focus on delivering absolute quality and respecting ingredients and, as a result, seasonality.

Our menu centres around meat and fish dishes but is also careful to offer interesting vegetarian options too. It changes from month to month, following the inspiration and mood of the moment. There are also one or two “dishes of the day” to complete the choice.

Our wine list has been carefully selected to effortlessly match our menu and, although we are not a wine bar, we do always try to stock a selection that includes something for all kinds of palates. 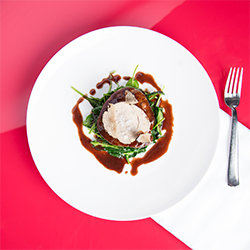 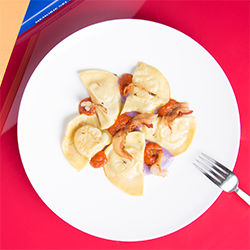 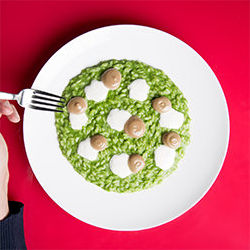 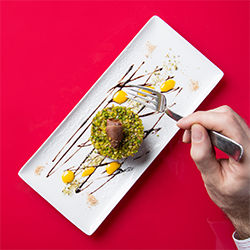 Catering and Take away


We kindly ask our customers to promptly inform us regarding any known allergy
Menu in collaboration with Planet Farms
Cover charge is € 3.5

FOOD FOR BODY AND SOUL

Organic and raw food devotees, vegetarians and carnivores, vegans and fruitarians are just some of the members of today’s great food tribe. Oftentimes they follow blindly without any real knowledge of what they are doing (or eating), with the result that food becomes a battlefield for their beliefs. Some great thinkers and writers have become so exercised they have even put pens (not just penne) to paper. A few examples?

In Ulysses, James Joyce wrote that “God made food, the devil cooks”. Thanks to the wisdom of our grandparents we know that the latter also invented saucepans – but not their lids, of course…

Oscar Wilde, for his part, wrote that he only accepted invitations to “heavy” dinners because he said he hated “people who take meals lightly!” Wilde loved company and food so much that he declared:“After a good dinner one can forgive anybody, even one's own relatives.”

French politician and food-lover Jean Anthelme Brilliant Savarin observed that “Animals feed themselves; men eat; but only wise men know the art of eating” which is something along the same lines as what Confucius meant when he said “there isn’t a man that can’t drink or eat but only a few understand what has taste”.

The great Hypocrates, on the other hand, advised us to “make food your medicine and medicine your food”, something German philosopher Feuerbach probably agreed with as he declared “A human being is what he eats”.

Let’s not forget, last of all, what Rabelais said: “Hunger comes from eating, thirst passes when you drink”, while Baudelaire famously postulated that only people that drink water have something to hide.

God
made
FOOD,
the Devil
THE COOKS
James Joyce

We could go on and on in the same vein but strangely enough, there are very few Italians on the list of great thinkers that have held forth on the subject of food.

Perhaps that is because here in Italy we prefer to cook our food, live it and venerate it rather than just write about it.

Obviously, when we talk about food, we are talking about it on a deeper level than as mere nutrition. This is particularly true here in Italy. It might seem strange that there are so few culinary quotes and quips from Italians. However, on reflection, I feel that there is a very simple reason for that: the whole question of food is so serious, ancestral, sacred and atavistic to us that what is quite literally a source of pensive wonder to the great thinkers is simply a natural instinct to us. Almost like an extra sense, if you will….

Take garum, for example. It was a sort of anchovy paste, only probably very salty and spicy, used by the Romans as a condiment and the basis for an endless array of dishes. It was even spread on bread as a snack. However, even though there were dozens of different types of garum, no one, not even the greatest historians or sociologists of the day, thought to pass down the recipe.

We won’t try to dazzle you with elaborate menu descriptions or showy architectural presentation at Santa Virginia: what you see on the menu is exactly what you will get on your plate, just as you would expect. Except that it will be delicious…that much we guarantee. 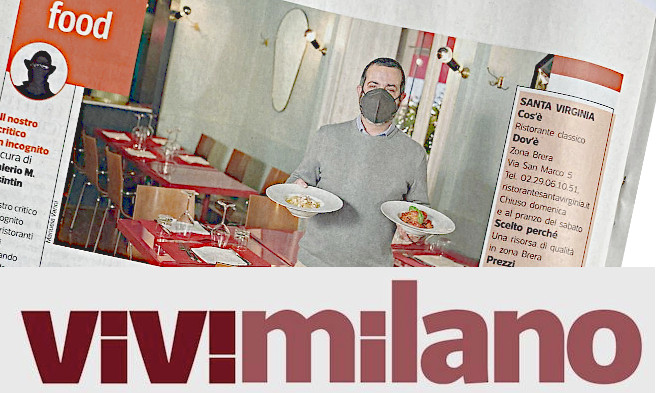 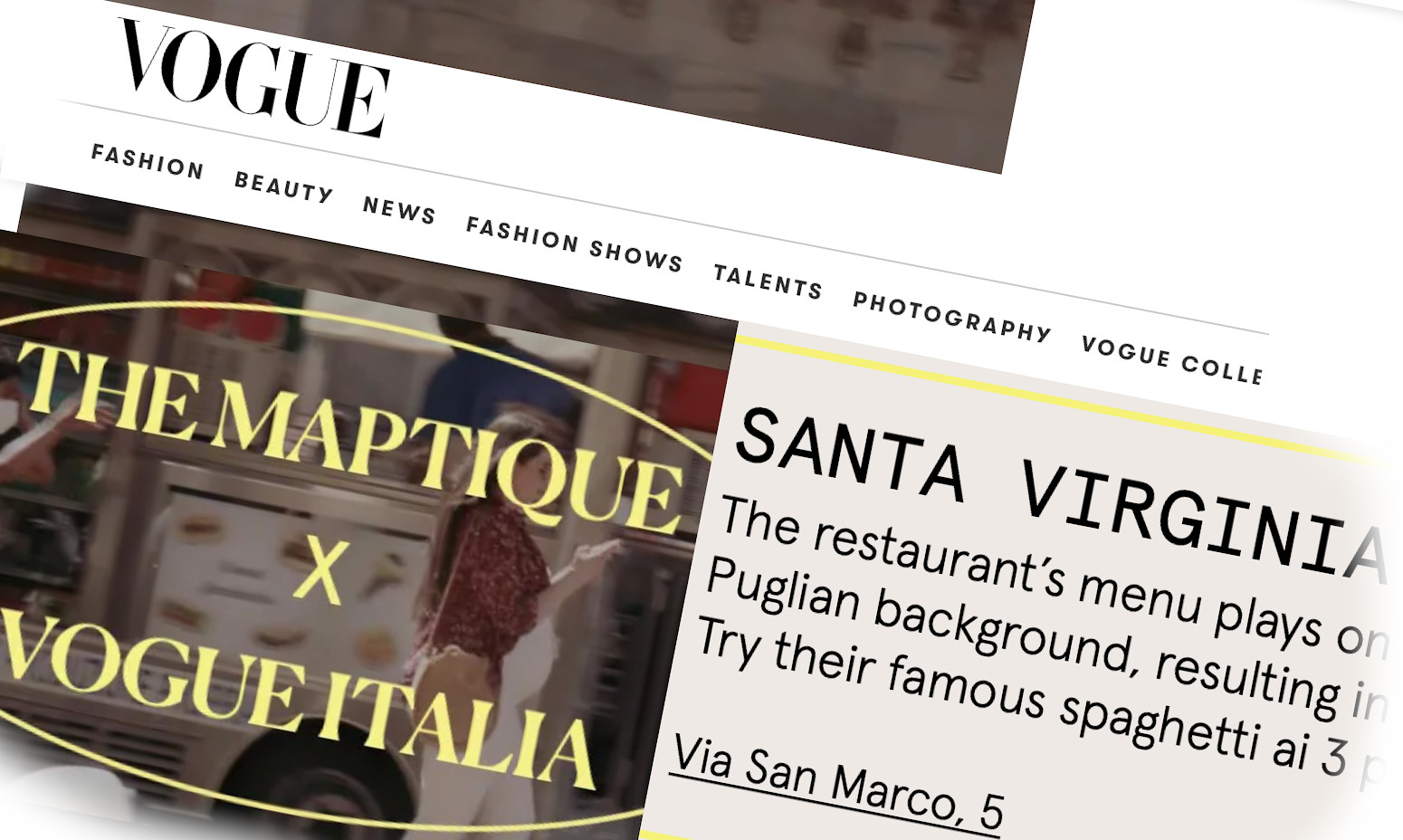 The restaurant’s menu plays on the the owner’s Milanese/Sicilian/Puglian background, resulting in a delicious... 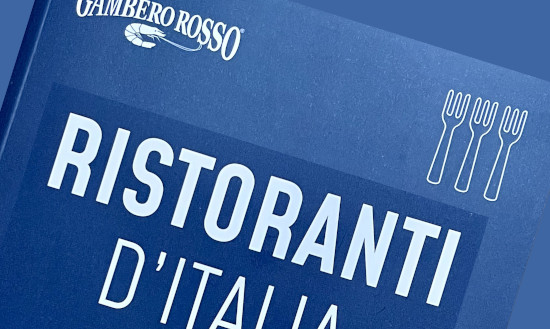 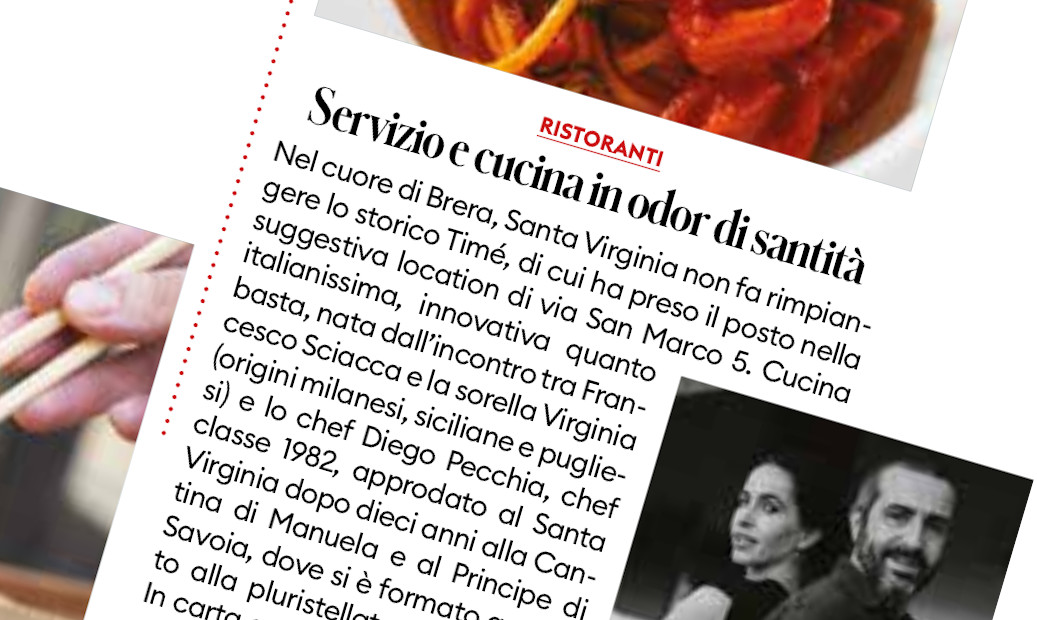 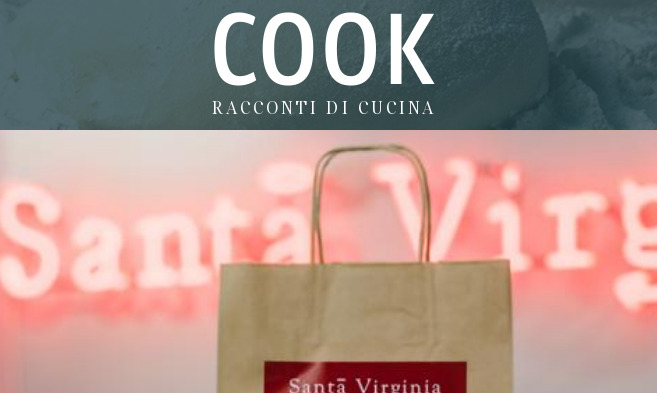 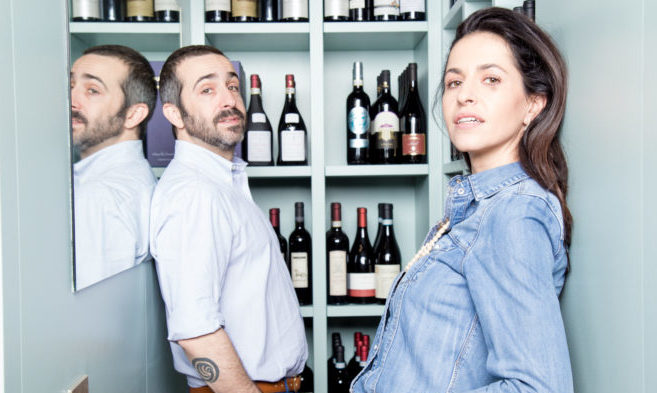 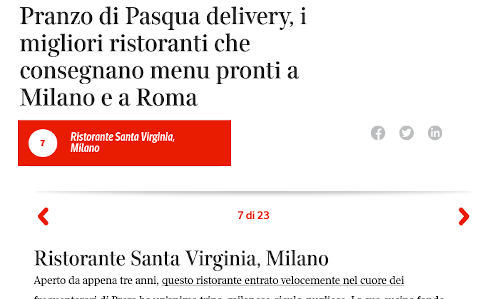 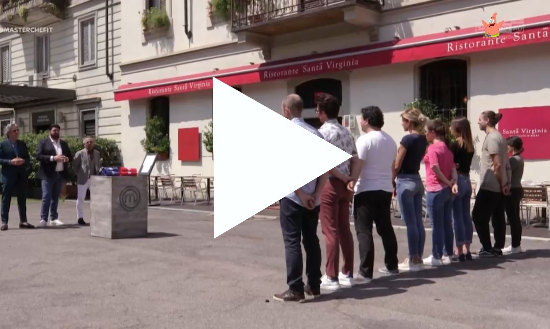 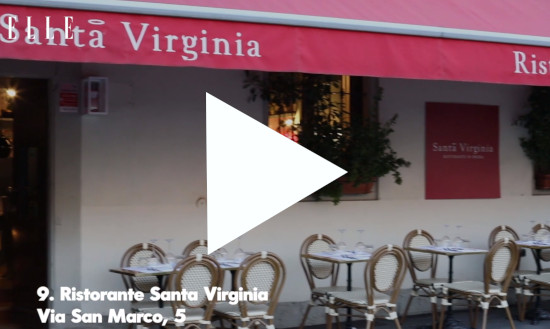 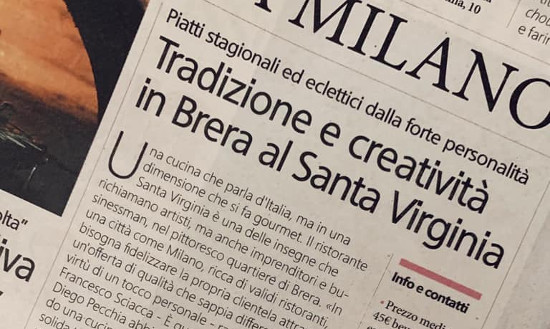 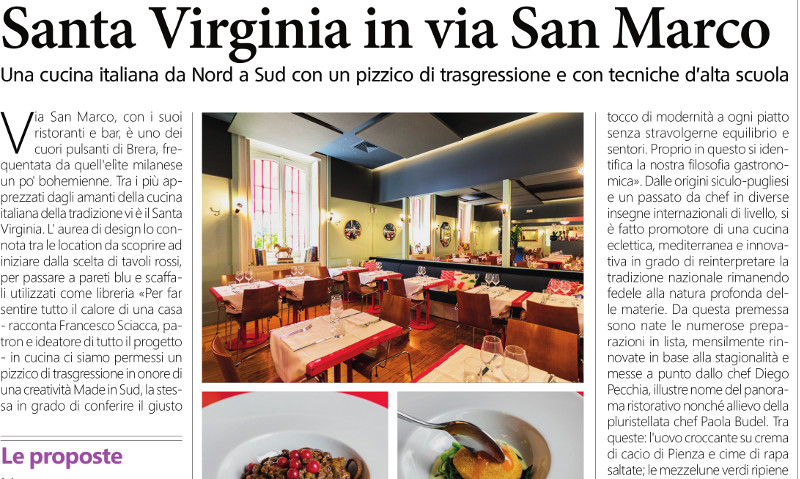 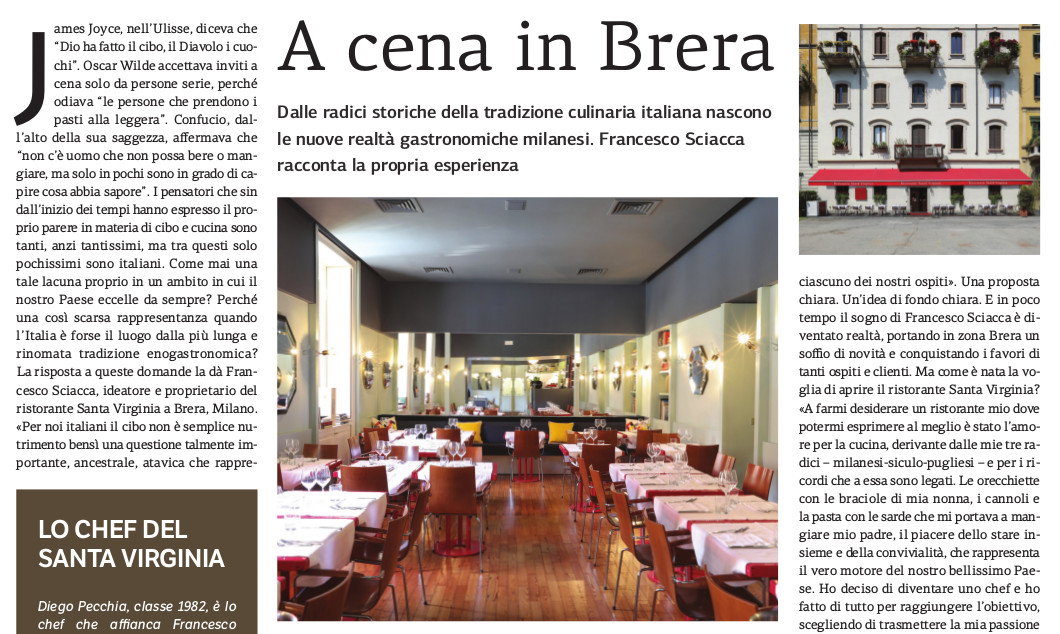 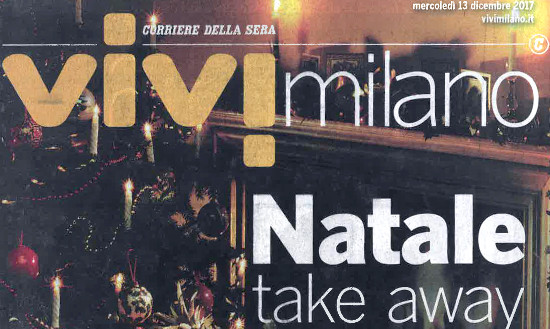 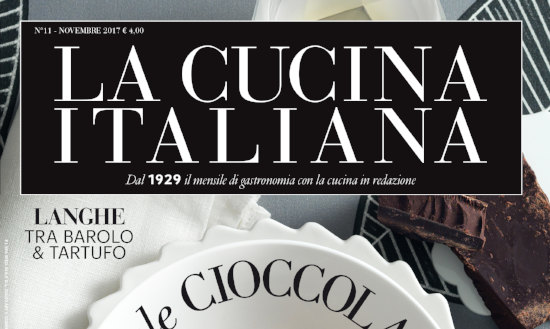 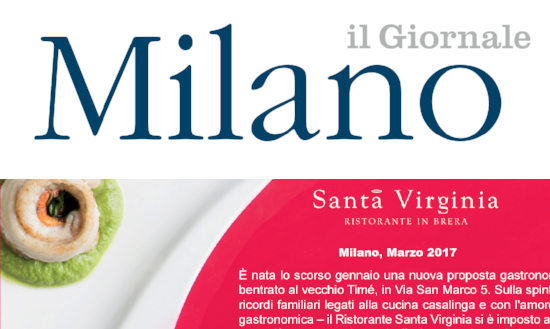 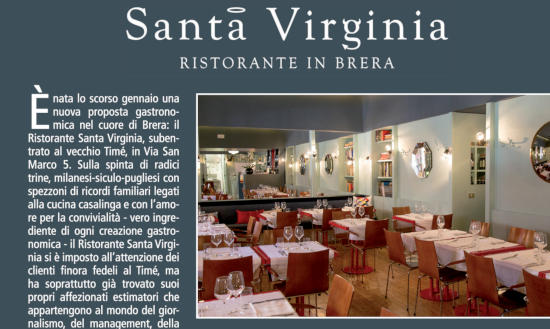 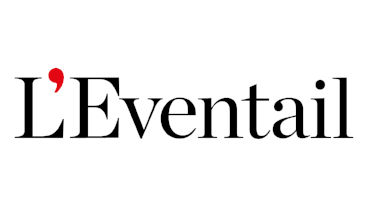 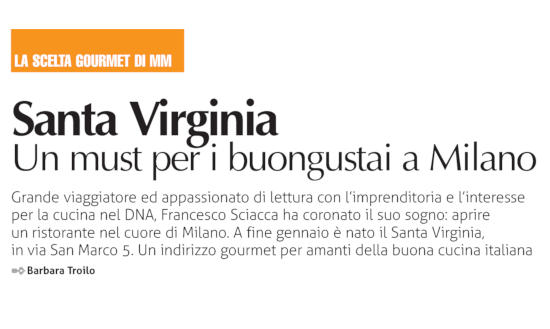 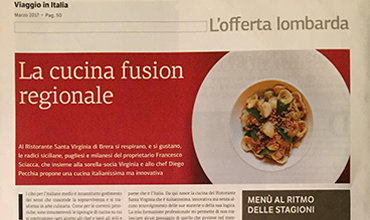 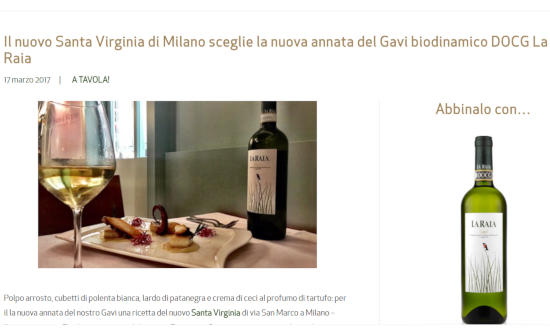 HAPPY HOLIDAYS!
WE'LL BE BACK ON AUGUST 30TH!

Buy now the kit we created for you to enjoy a bit more this quarantine period.
50% will be donated to the Protezione Civile.